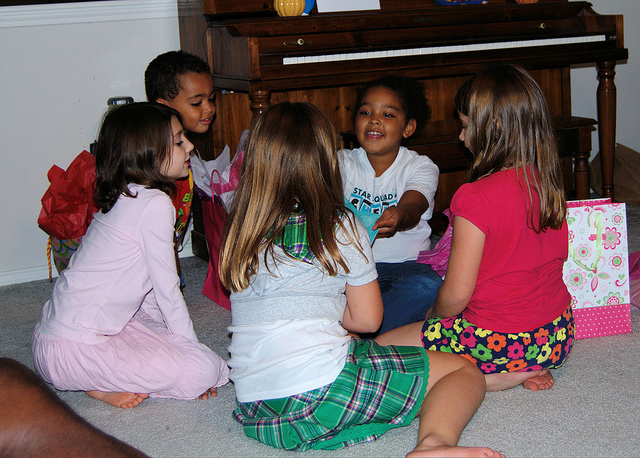 Hannah’s birthday was actually yesterday, and she chose to have a sleepover for her party. Mother Nature foiled my plans to have them play outside. Zachary’s soccer game was called at the half due to rain and lightning, and we had standing water in our yard for most of the day. Just as the first two girls arrived, Hannah got sick; we thought it might just be nerves, so the other girls stayed. After they played for a while, Hannah opened the gifts. Then, I got the girls together for a photo. Then, they started getting a little silly. After pizza, we had cake. Hannah wanted a Littlest Pet Shop cake, so I decided to do a horse. I took a shortcut and used canned chocolate frosting for the horse’s body, and it did not work as well as buttercream, so I don’t think I’ll use it for stars again. The girls were even sillier by cake time. After cake and ice cream, all of the kids went upstairs to watch a movie. Hannah fell asleep, so that’s when we realized she was actually sick. We decided it was late enough not to call the other girls’ parents, especially since we thought they were going to sleep in a separate room from Hannah. Zachary and the remaining girls played musical rooms for a while, but we finally got them all to settle down and sleep.